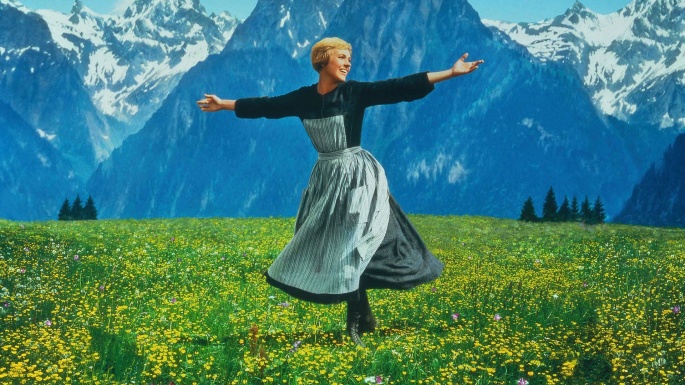 After watching an enthralling rendition of Rodgers & Hammerstein’s musical, The Sound of Music, in Stratford last weekend, it occurred to me that

I’ve never written a post about Salzburg, Austria, which is the idyllic setting for this immortal tale of love based on the memoirs of Baroness Maria Von Trapp.

Alan and I visited Salzburg while on a river cruise of the beautiful Blue Danube aboard (can you imagine?) a lovely riverboat named The Sound of Music!    🙂

Salzburg is on the border of Germany,  nestled in the foothills of the Alps

along the Salzach River,

However, their “Old Town” city center is still romantically quaint. 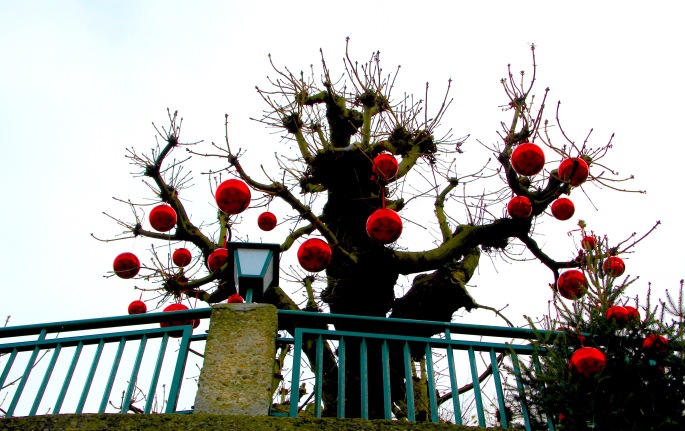 and even in the chill of November, it was bright… with Christmas decorations!

as the backdrop for The Sound of Music,

and we visited some of the favorite sites from the movie,

such as the gardens where the children played

and the cemetery where the Von Trapps hid from the Nazis.

However, Salzburg is also famous as the birthplace of Christian Doppler
(physicist who first described the “Doppler effect”)

and Wolfgang Mozart, who to this day remains one of the world’s
most prolific and enduringly popular classical composers.

In fact, Mozart is such an icon in Austria that you can buy Mozartkugel
(“Mozart Balls”…dark chocolate, marzipan, and nougat)
as easily as you can buy a Tim Horton doughnut in Canada! 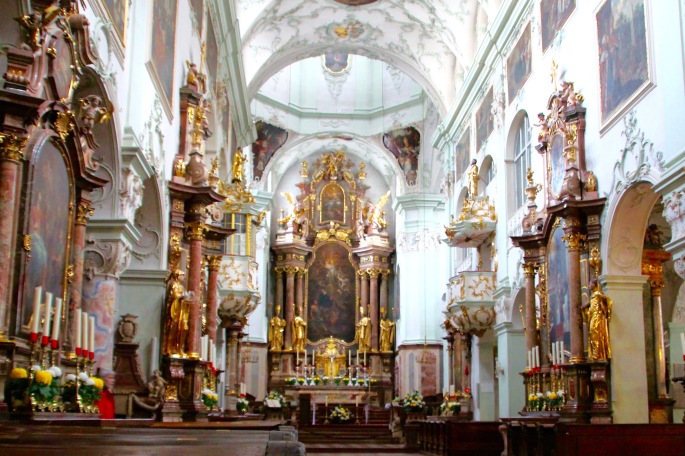 One of the highlights of our day was stopping to pray
at the magnificent St. Peter’s Basilica

and then enjoying an incredible luncheon at the famous St. Peter’ Stiftskeller,

where they’ve been lavishing hospitality on people for over 1,200 years! 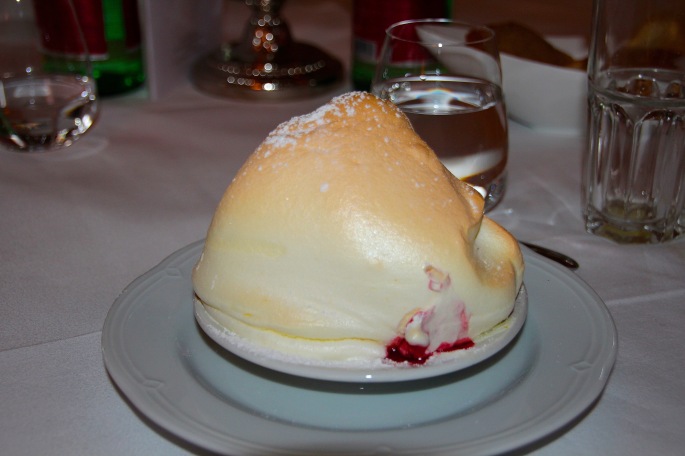 which is more than 1,000 years older than America’s
Ye Olde Union Oyster House in Boston (just to put things in perspective).

Yet another highlight was teatime at the world-famous Sacher Hotel,

where I couldn’t resist trying a world-class “Sacher torte”

(although Alan couldn’t resist the world-class apple strudel…
second only to our daughter-in-law Gerlinde’s!)

Just outside the Sacher Hotel is the Salzburg Makartsteg, which spans the Salzach River and is lined with lockets to commemorate great loves. 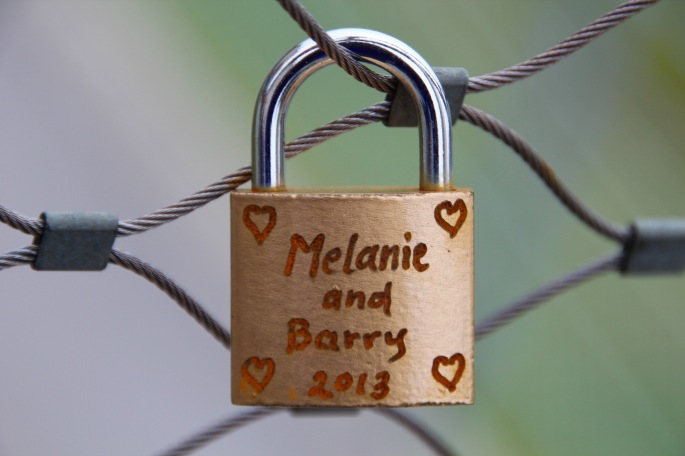 Sadly, Alan and I hadn’t brought along a locket, but as I examined these cherished treasures, I couldn’t help but think of Sister Maria.

Did you know that she really wasn’t in love with Georg when she married him?

Beneath the gauze of Hollywood romance

was a woman who married out of a sense of duty.

She was angry with God on her wedding day, but later wrote in her memoirs: 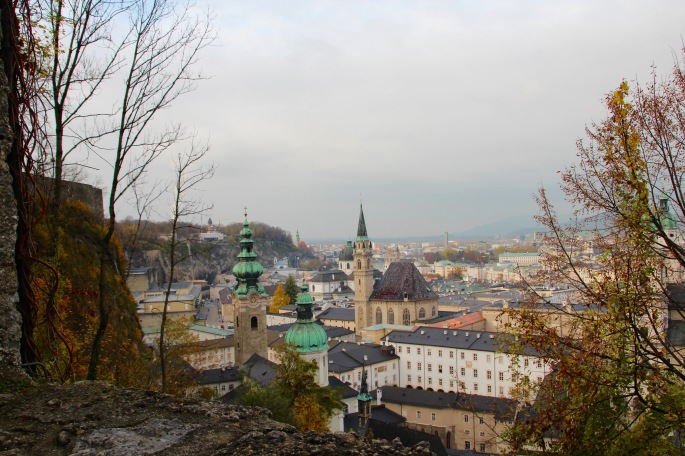 “I learned to love him more than I have ever loved before or after.” 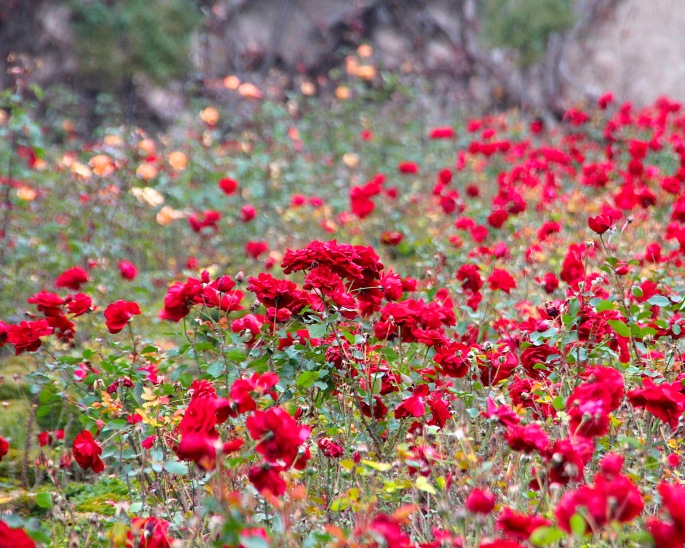 I think that’s  astounding…and an even happier ending 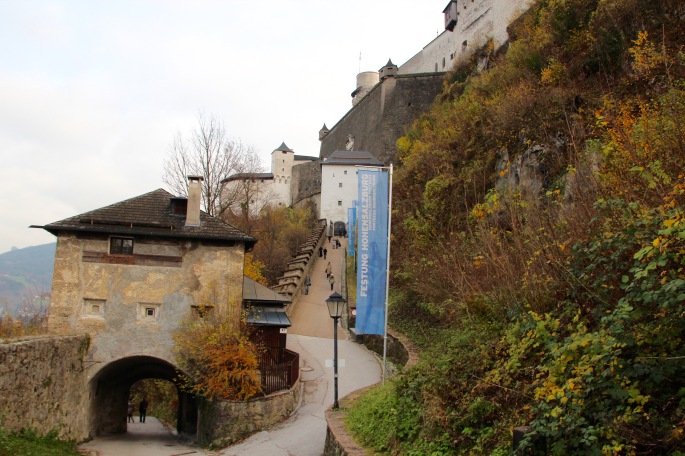 (given the reality of her situation) than what’s portrayed in the musical.

I also think Maria’s testimony holds out hope
to anyone who’s struggling in their marriage.

God can bless perseverance with true love. For anyone who’s willing!

“Now the end of the commandment is charity out of a pure heart,
and of a good conscience, and of faith unfeigned” (1 Timothy 1:5).

P.S.—Someone who read this pointed out to me that today is Julie Andrews’ 80th birthday…so it’s an especially good day to commemorate this love story!  🙂

Well, we eventually had to leave the beautiful “Emerald Isle” & flew via Ryan Air

(great deals on flights in Europe) on to Edinburgh, Scotland, where I had spent a

wonderfully happy summer doing mission work back in 1972. Edinburgh is a

bustling city with nearly a half a million inhabitants. It’s the second largest city

in Scotland and the seventh largest in the U.K. It was a major historical center of 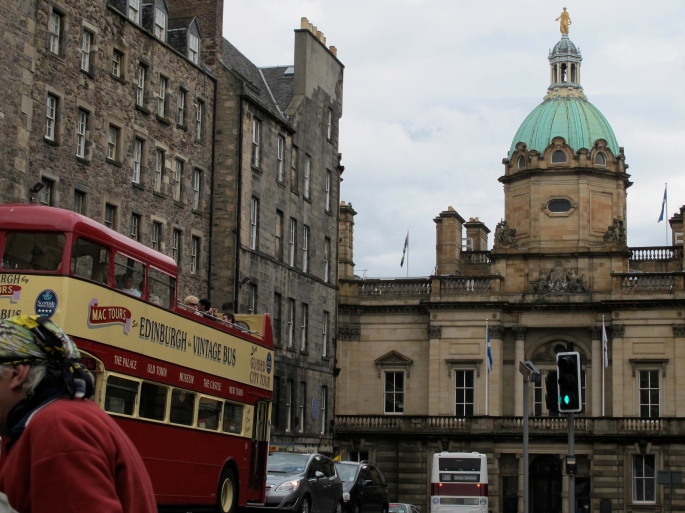 the Enlightenment and was known as the “Athens of the North.” Both the Old 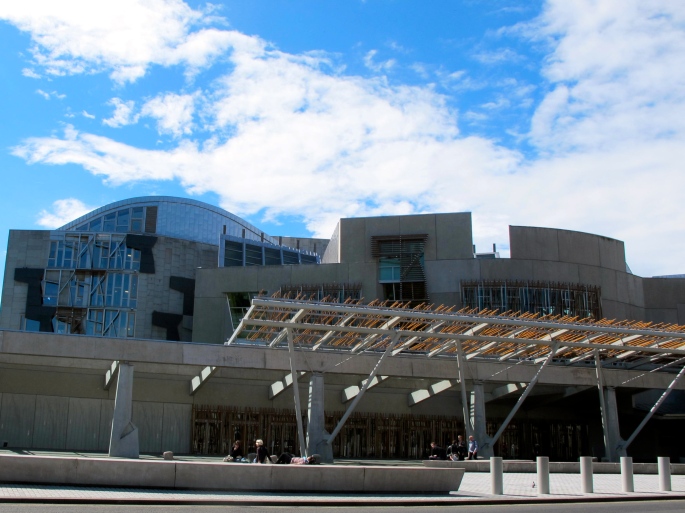 their unique beauty and charm. In fact, there are some 4,500 buildings listed on

their national register!  Today, Edinburgh is Scotland’s political and cultural

center, and although we visited in May (which is a great time), I would definitely 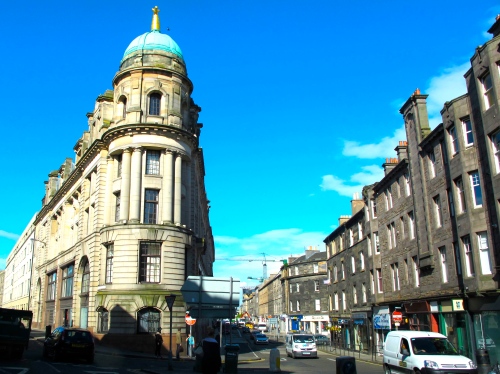 years ago it wasn’t hard, but now the tickets sell out way in advance)! Also in

August “The Fringe” occurs, the world’s largest arts festival, sprawling all over 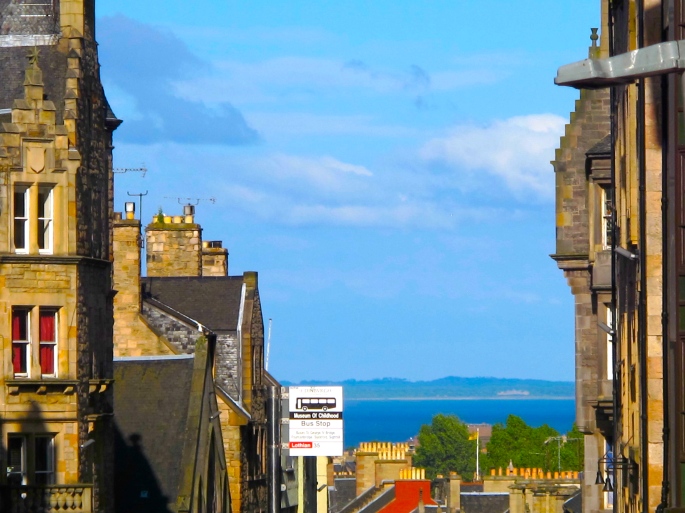 the city, especially down the Royal Mile, and boasting almost 2700 shows

We arrived too early on a Sunday morning to check into our apartment, and 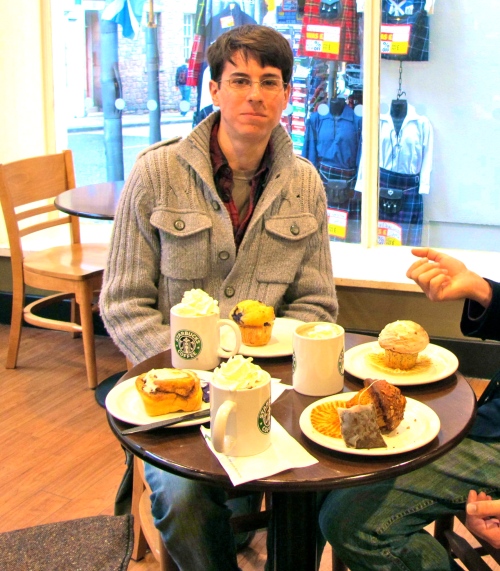 so we chose the only reasonable alternative…a great comfort breakfast! From 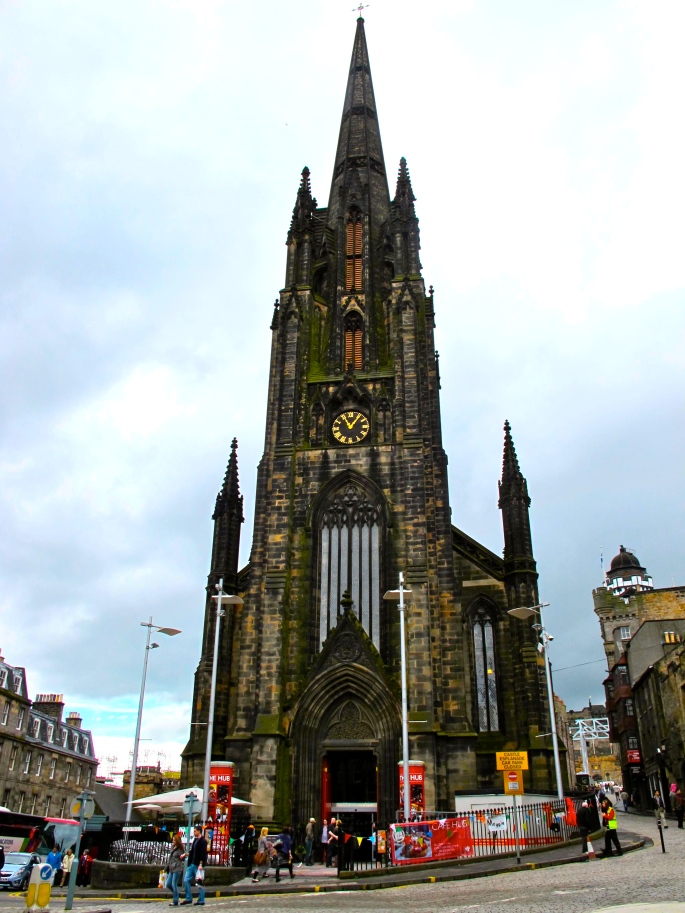 my months of sharing the gospel with folks all over the city, I felt at home on the

the Royal Mile and Princes Street, and so we parked and began a walking tour.

Our first event was to enjoy a worship service at one of the many area churches.

Even the evangelical services are conducted in magnificent buildings with 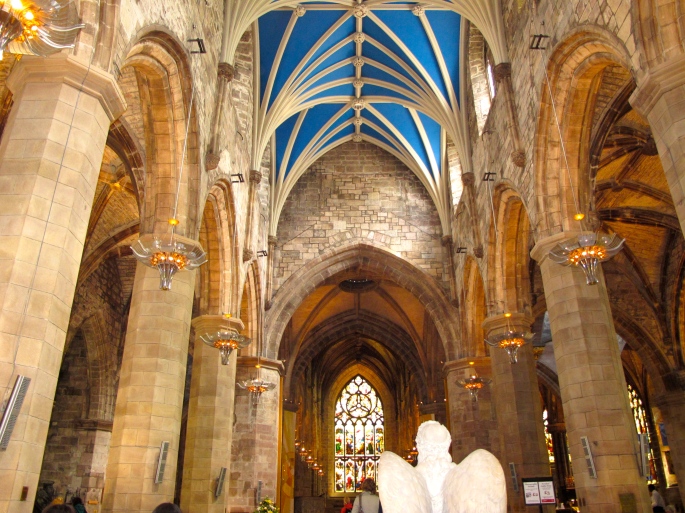 gorgeous interiors and inspiring music. After a refreshing service, we continued

up the Royal Mile to Edinburgh Castle, built at the top of volcanic Castle Rock.

This area hosts the Military Tattoo & has become a national symbol of Scotland. 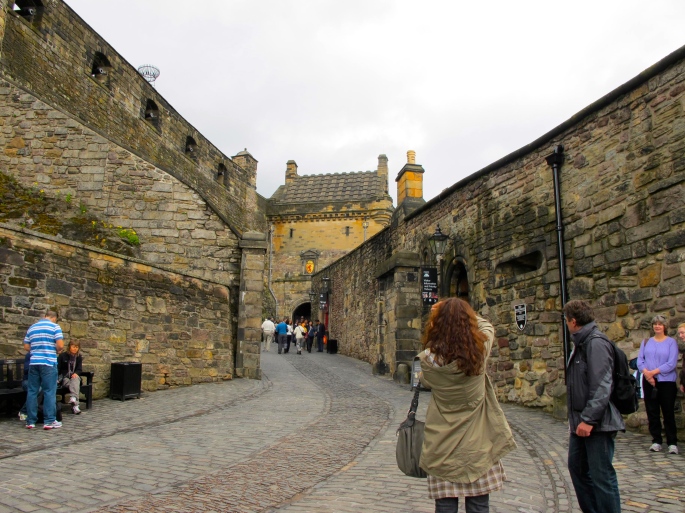 Due to the great views and museums, it’s Scotland’s top tourist attraction. Being

very tired by this time, we stopped for a wonderful Indian lunch and decided to 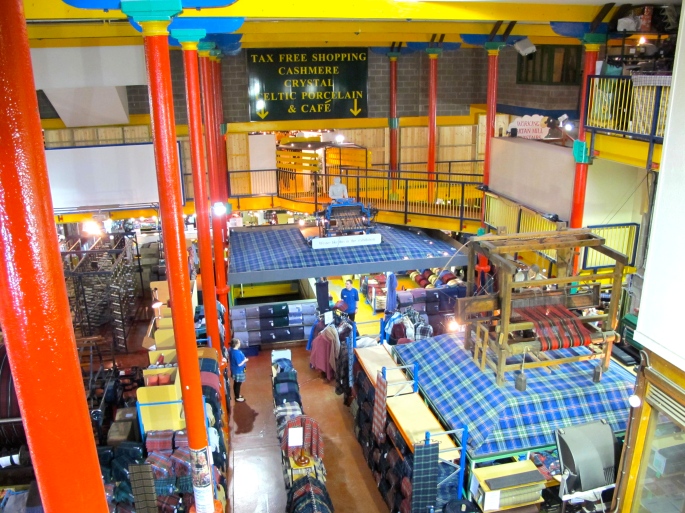 than tour museums or even their delightful zoo and botanical gardens. We were

gleaming apartment (including even a laundry room) that we had found online for less than the price of most regular rooms in capital cities around the world!

Thus revived, we headed out to enjoy views of Holyrood Palace and the gorgeous

natural beauty surrounding Edinburgh. I remember back in 1972 thinking that

some day I wanted to bring Alan back to see Edinburgh and the wild North Sea.

Thank you, Lord, for allowing me such a great privilege! Following God on the

upward climb has been much more challenging than I ever could have imagined,

but still, I’m thankful every day for the gift of life, for our wondrous world, and 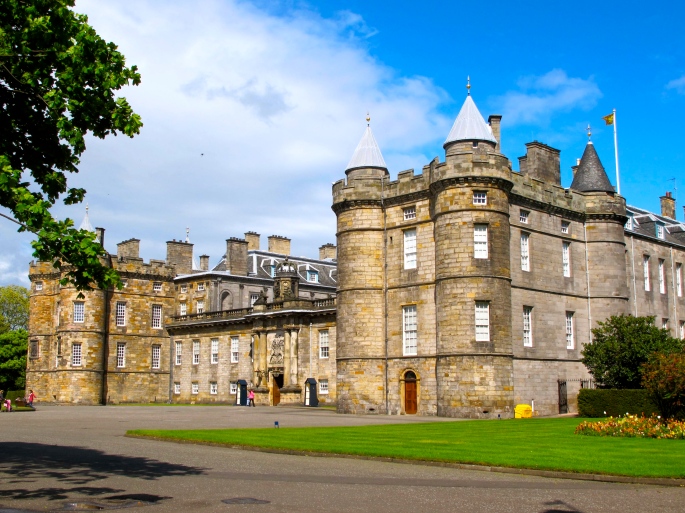 for a God who loves us and is willing to guide us home to heaven.

“Behold, the tabernacle of God is with men, and he will dwell with them, and they shall be his people, and God himself shall be with them, and be their God.” (Revelation 21:3)

“There is not a heart but has it moments of longing, yearning for something better, nobler, holier than it knows now.”  —Henry Ward Beecher

“My heart has no desire to stay
Where doubts arise and fears dismay;
Though some may dwell where those abound,
My prayer, my aim, is higher ground.

“I want to live above the world,
Though Satan’s darts at me are hurled;
For faith has caught the joyful sound,
The song of saints on higher ground.

“I want to scale the utmost height
And catch a gleam of glory bright;
But still I’ll pray till Heav’n I’ve found,
“Lord, plant my feet on higher ground.”

“Lord, lift me up and let me stand,
By faith, on Heaven’s table land,
A higher plane than I have found;
Lord, plant my feet on higher ground.”