When our kids were little, we had a secret password. Whenever someone knocked on our bedroom door, Alan would call out, “What’s the password?” If the child answered, “Chocolate on the face,” Alan would tell them they could come in, on the theory that any kid with chocolate on his (or her) face probably belonged to us. 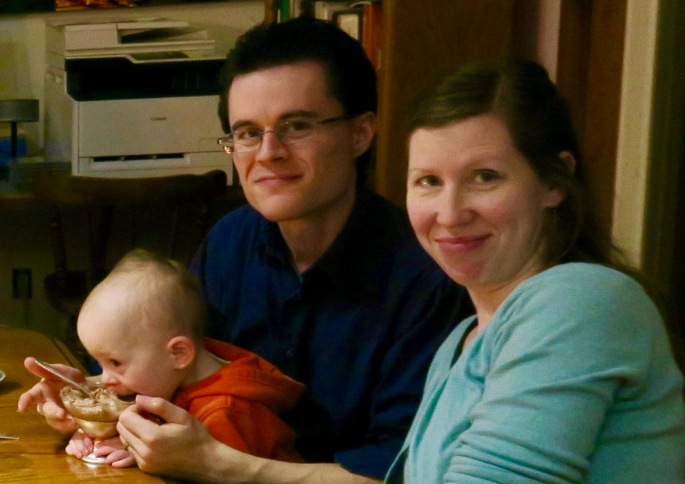 Now we’re on to our next generation of chocolate lovers!

I know I should be passing along healthy recipes for  things that are super nutritious, but given that last Tuesday was Valentine’s Day and today is Alan and my 44th anniversary, I thought it might not be too off side to share my favorite recipe for chocolate mousse, which is actually fairly healthy as far as desserts go, not to mention so elegant that people think it’s difficult to make (although it’s not, at least not the way I do it), and so delicious that kids will definitely end up with chocolate on their faces!

Add 18 oz. chocolate chips (I used milk chocolate, but dark works well too),
1 stick of butter, and a pinch of salt. Heat and stir until completely melted and smooth. Remove from heat.

Beat 4 eggs (yes, I use the whites and the yolks) with an electric mixer until frothy, then add  1 cup heavy whipping cream and whip until soft peaks form.

Slowly add the hot chocolate syrup in a small stream to the whipped mixture, continuing to whip everything together until it’s of one gloriously frothy, consistent texture. Immediately spoon into individual serving dishes and chill thoroughly. You can garnish with more whipping cream and shaved chocolate or fruit, but it’s pretty yummy just by itself! Also, this can be divided into 6-8 servings, depending on how much room you think people will have for dessert.

“Thou openest thine hand, and satisfiest the desire of every living thing.”
(Psalm 145:16, speaking of God)