It was the perfect day for an Easter egg hunt outside, and in less than 15 minutes Alan and I had distributed all the Easter eggs, candy, and chocolate rabbits—especially the chocolate rabbits (everybody’s favorite gift)—around our field.

Quick as a flash, our grandchildren flew around the field, gathering up all the surprises and treats.

However, to the children’s horror, two of the bunnies (which had been hiding in the sunshine) must have experienced green-house effect heat and melted down into little masses of mess! 😦

Isn’t this a picture of so many of our fondest dreams in life? We have such high hopes and work so hard preparing for the future.

We are eager and “do everything right” as best we know how, but suddenly something unexpected dashes our hopes for “the perfect” ending and turns our “high point” into a low point.

At times like this, I am reminded that every dream and ambition apart from seeking God is like a hollow Easter bunny that will not withstand the heat of life. Better to keep my eyes on the Lord and find my joy in Him! “Happy is he that hath the God of Jacob for his help, whose hope is in the Lord his God” (Psalm 146:5). “Whom have I in heaven but thee? and there is none upon earth that I desire beside thee” (Psalm 73:25).

Fall, 1979  Alan is on call and both the boys are soundly sleeping…I find that even now, surrounded by innumerable blessings, my thoughts turn painfully to the events of last spring when we lost both of Alan’s parents so unexpectedly. I guess that’s why I keep putting off writing. After six and a half years of writing every week to both sets of parents, I really can’t write to anybody without thinking about our parents, and the sense of loss is still so acute that I avoid writing rather than consider again the void.

As a family, we’re surviving better than I expected considering Alan’s workload (which is worse than I expected). He is averaging 100-hour work weeks, which, when you consider the necessary time involved in eating, sleeping, and washing up, leaves very little time for the less basic aspects of life…such as fellowship and communion with loved ones. Last year Alan did a one-month rotation in February that was comparably difficult, and by the end of the month our whole household had fallen apart. This year we’re still thriving, and I can’t really explain the difference other than “His grace is sufficient.” A lot of my own expectations and attitudes toward Alan have changed too. I’m better learning to place my expectations in the Lord, as it says in Psalm 146:5, “Happy is he that hath the God of Jacob for his help, whose hope is in the Lord his God.” I’m also beginning to understand the Biblical role of the wife as chief helper, supporter, and comforter rather than chief critic and thorn-in-the-flesh! 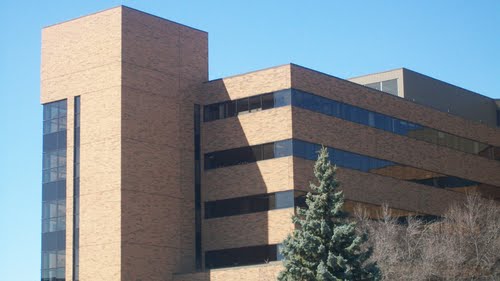 While the kids and I are shut off from Alan, he is shut off from the entire spectrum of life outside the hospital, and this is extremely difficult for him to cope with (although I think he’s doing awfully well). He is rarely able to attend church, even more rarely able to enjoy friends socially, and once in a while we get to see more than a half an hour of him in a day! We try pretty hard to beat the racket, and one of our favorite tricks is to pack a picnic supper and visit with him in the interns’ lounge. He is often good for 20-40 minutes then, although it is risky. The boys have learned to be pretty flexible. For instance, tonight we spent two hours at the hospital, and he was only able to slip out for about three five-minute visits. The boys and I toured the baby nurseries, ate pie in the cafeteria, watched the construction of a new parking lot, played ping pong (for the residents, although I have never seen anyone but us use the table), etc. They seem to have pretty good attitudes and just appreciate what they can get of him. Kids seem so much more flexible than adults!

And, the boys are growing. They are a never-ending source of encouragement to me. Such sweet ages! [Almost 4 and 2] Twice this week I’ve slept in, and both times I was awakened by a shower of kisses from two pajama-clad little yellow fluff balls. They have been really happy ever since we moved to Ann Arbor, and I think it largely has to do with their being able to run and play freely outside here at the U. Townhouses. They are definitely the “outdoor” variety, as Alan puts it, but given plenty of run space they are just as content as can be. We are living in a town house cooperative, and the homes back onto a huge communal grassy area with a basketball court (used for riding big wheels) and playground equipment. Plus, there are oodles of kids, and there is never a dull moment. I feel half motherly towards all the neighbor children, and they all mother Aaron and Michael (who are just about the youngest in our immediate area). After the inevitably difficult adjustment period, the boys have found a comfortable niche in the action, and there is considerably more laughter than tears.

One real highlight: we’re expecting Baby #3 on March 5th. (You know how reliable due dates are.) Alan already has the baby named Jonathan, but I’m eating pink vitamins. Aaron would like a sister, and Michael just wants a baby. We are all still thinking we would like lots of kids, so none of us is sincerely particular about the sex, but we’re all very excited. I’ve had my usual rousing bout with morning sickness, but I’m beginning to have some good days lately, so there is hope!

Well, I’m out of space, and besides all that, talking about morning sickness reminds me that it’s time for my hourly sugar injection, so I’d better run downstairs for an orange before I throw up. What was that line about rose gardens? Life was never meant to be easy, but it is His will that we be conformed to the image of His Son. If only!!! We love you!