How do you feel about the results of Georgia’s senatorial election? Momentous and historic for sure! Rev. Raphael Warnock made history as the first Black Democrat elected to the Senate from a southern state, only the 11th Black senator in the entire history of our nation, and the first Democrat to win the senatorial race in Georgia in the past 20 years.

Jon Ossoff, age 33, is the first millennial to be elected to the Senate, the youngest senator-elect since Joe Bidden in 1973, and the youngest sitting senator.

I think these two men winning the election in Georgia is indicative of the radical changes that are likely to occur in America over the next few years, given that the Democrats will be in control of both the presidential office and the Senate. Personally, I’d like sweeping changes, but what I’d love to see is our nation returning to faith in God, repenting of our national sins, and rededicating ourselves to supporting biblical principles, not only in our hearts and homes but throughout our legal system.

Whether you’re a Democrat or a Republican—or a citizen of some other nation—if you’re a Christian, would you join with me in praying for America’s healing? And, it’s not just in America. I’ve been praying with Carmen, a blog follower from Argentina, for the senate race there, where on December 29, 2020 legislation was passed supporting legalized abortion throughout pregnancy with possible recrimination for physicians who don’t want to perform abortions.

Also, the elders at Trinity Bible Chapel in Ontario, Canada have been summoned to appear in criminal court with the possibility of being fined $10,000 for allowing a church service, as the government had ruled that church is a non-essential service. Just for your prayers and consideration, here are a few more of the facts:

“We are peaceful family men seeking to pastorally care for our families and our church in sincere obedience to God. We are not criminals. Officers from the Waterloo Region Police Service (WRPS) showed up at each of our homes last night at roughly 8pm and gave us each a summons to court. While other pastors in Ontario have faced similar charges under the [Reopening Ontario Act]for holding church services, to our knowledge this is the first time that each and every member of an entire elders board has been charged for gathering a church to worship. Although we know of officers within the WRPS who personally disagree with these charges, it appears the WRPS is trying to make an example of us. For years we have taught our children to respect police, and now our children and grandchildren are witness to their fathers and grandfathers receiving charges from police for worshipping Christ with our church. It is a dark day for Waterloo Region and Ontario.”

In their defense, the elders pointed out that “Our Saviour shed His blood to purchase the church, and therefore deeming the church ‘unessential’ is tantamount to deeming the blood of Christ unessential, which is a public act of blasphemy. One day our elected officials, bureaucrats, and police will stand before the court of God’s justice for these acts. We earnestly pray that the Holy Spirit would draw them to his Son, Jesus Christ, who offers free grace and forgiveness to all who would repent and put their faith in him. Jesus Christ is the King of kings and the Lord of lords, and therefore we must honour and obey him above all earthly governments.”

They ended their defense with these stinging words by C.S. Lewis: “Of all tyrannies, a tyranny sincerely exercised for the good of its victims may be the most oppressive. It would be better to live under robber barons than under omnipotent moral busybodies. The robber baron’s cruelty may sometimes sleep, his cupidity may at some point be satiated; but those who torment us for our own good will torment us without end for they do so with the approval of their own conscience.”

Christians of the world, we need to unite in prayer! May God’s kingdom come and His will be done on earth as it is in heaven.

P.S.—If you are free for the next 8 Thursday evenings from 8:00-9:30 Eastern Time and would like to join me in an intensive time of studying and practicing prayer, please let me know! We start tomorrow night, but it’s not too late to sign up! If you’re interested, there are more details here: https://kathrynwarmstrong.wordpress.com/2020/12/08/come-pray-with-me/

Happy New Year! I hope this is a year of many wonderful new beginnings for each of us. Have you made a few thoughtful goals or resolutions? I have, and I sincerely hope to be able to accomplish them. One easy one to share (but hard to do) is my goal of finishing the new addition to our home, then furnishing and decorating it . . .  and then getting rid of all the unnecessary leftover junk that’s been cluttering our basement since the kids grew up!

In that vein, I was sorting through some boxes of my father’s writings and notes.  I always thought he was a pretty staunch atheist until he was 86, when he had a change of heart and mind and entrusted his life to Christ as his Savior. Part of the constellation of beliefs he espoused up until about the year 2,000 A.D. was faith in evolution and the Big Bang Theory, so I was amazed to find this card in his file box: 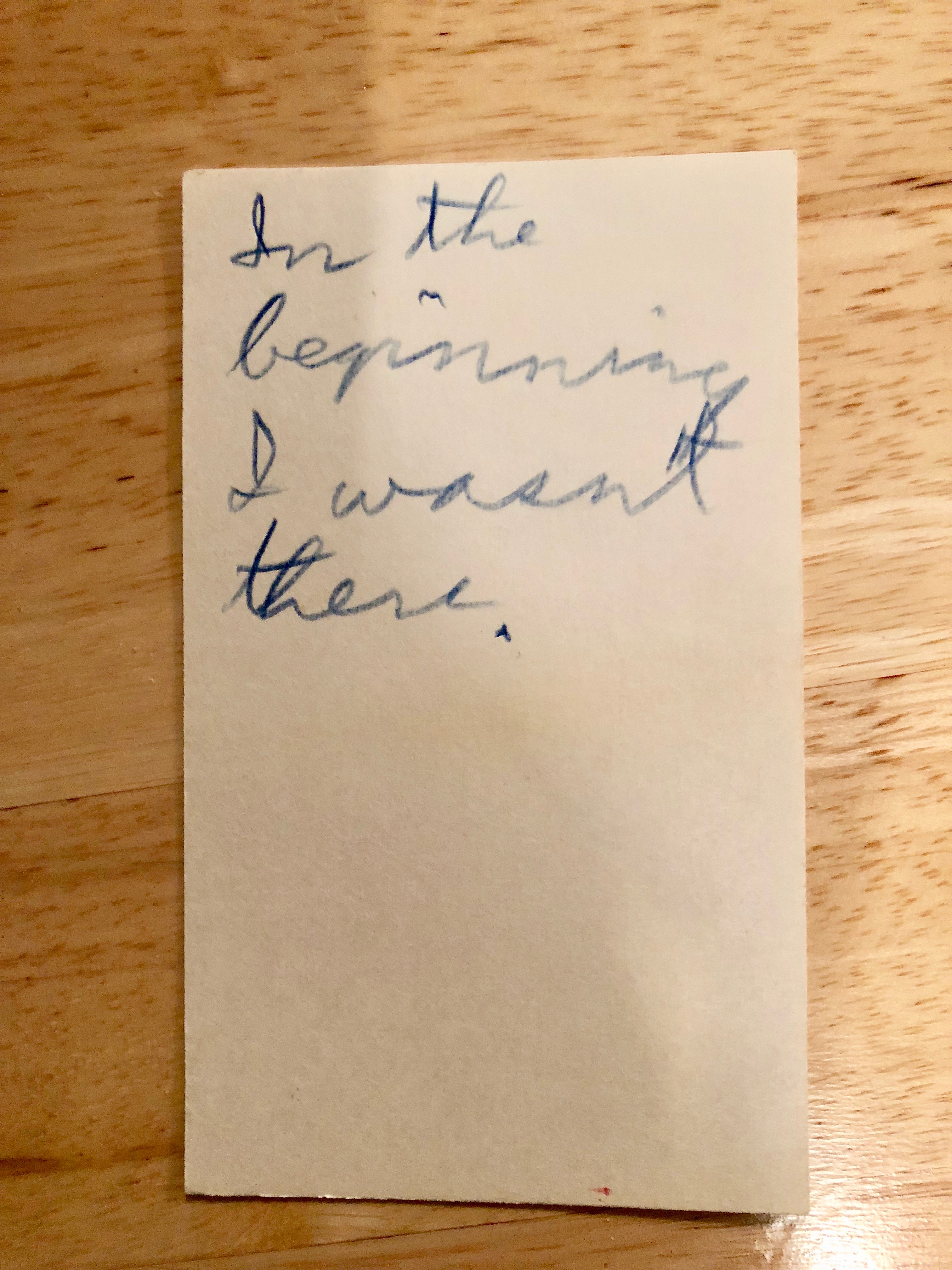 I’m not exactly sure when he wrote that that note, but it was close to this one:

I had heard the story that my father was a believer as a child but lost his faith in college . . . back in the 1930’s. For nearly seventy years, there was precious little evidence of faith in my father that any of us observed. And yet, tucked away in his file box of writing ideas were these little sparkles of faith! First, an acknowledgement that he wasn’t present at the beginning of time and space. “In the beginning”  . . . he wasn’t, but the Bible says that God was. To me, this is a humble recognition that it would be foolish for him to try to deny God’s existence. Second, a prayer asking God to help him accomplish His will, dated January 2, 1974. It has a stain from tape, and so I think it must have been a New Year’s resolution of sorts, placed??? somewhere in or on his office desk??? . . . written almost 30 years before he embraced the Gospel publicly.

This may not seem thrilling to you, but it is to me, because it tells me that the seeds of faith, planted in my father’s heart during early childhood, had lain dormant for many years but had never completely died. Have you been praying for a loved one for years and years without seeing visible fruit from those prayers? Please don’t stop!! I prayed every day for my dad for almost 40 years before he told me one day that he wanted Jesus too.

Or, perhaps somewhere in your own distant past, you believed in Jesus as your Lord and Savior but have since drifted away, thinking the world is such a mess that there must not be a God . . . or feeling that you, yourself, are so hopelessly messed up that if there is a God, He doesn’t care about you. Please turn back to God and ask Him to heal you. God does exist; He is not dead; He does care about you! However, it is possible that “your iniquities have separated between you and your God, and your sins have hid his face from you, that he will not hear” (Isaiah 59:2). If so, I beg you to give up wanting your own way more than you want God. Repent of your sins, and believe in Jesus! He can—and will—save you! “The Lord is not slow to fulfill his promise as some count slowness, but is patient toward you, not wishing that any should perish, but that all should reach repentance” (2 Peter 3:9, ESV).

Will you join me in starting this New Year with renewed faith and hope? Let’s start at the very beginning by embracing the love and mercy of God. Will you pray with me?

“Our Father which art in heaven, Hallowed be thy name. Thy kingdom come, Thy will be done in earth, as it is in heaven. Give us this day our daily bread. And forgive us our debts, as we forgive our debtors. And lead us not into temptation, but deliver us from evil: For thine is the kingdom, and the power, and the glory, for ever. Amen“ (Matthew 6:9-13).

How much does it cost to vote? Well, that depends on what you’re voting on. For instance, it doesn’t cost anything to vote for your favorite ArtPrize entries, although you do have to be in downtown Grand Rapids and take the time to register on line. But, what about something huge, like a presidential election? In our country, the “cost” is about the same: you have to be a citizen of America and take the time to register. However, to vote wisely is a different story! At ArtPrize, right now you can vote for anything you like, so you can cast 1—1,453 votes. If you like it, you can vote for it, and that’s fun! Unfortunately, just the opposite is true in this year’s presidential race.

Did you watch the presidential debate last night? Trump and Clinton were introduced as the least-liked presidential hopefuls in the history of our country, and sadly, that reflects my personal opinion as well. Whether it’s a matter of voting for which one I “like” better, or even which one I like less, I just feel like throwing up my hands in despair. I believe this election will test each of our individual priorities and beliefs more severely than any previous race. I don’t have the slightest confidence that either of them is an altruistic statesman with the integrity and wisdom to stop our country’s sled ride into moral and financial bankruptcy. However, I don’t believe any of the 20± independent candidates—if elected—could do better (not to mention I don’t think any of them has a ghost of a chance of being elected). Bottom line: Are we sunk? I’d like to think not, but I’m fearful.

However, just when I’m feeling pessimistic about our country’s future (like last night), I remember that we can all choose to be part of the Kingdom of God. (“What time I am afraid, I will trust in thee” [Psalm 56:3].) This opportunity is open to anyone, not just in Grand Rapids or in America, but anyone who lives anywhere in the world. Like ArtPrize or the U.S. election, it doesn’t cost us a penny to vote! Like the U.S. presidential campaign, there are basically two choices on the ballot, and the “vote” concerns whom you’ll choose to be your personal sovereign: The Prince of this World, or Jesus, who is “The Prince of Peace.” I choose Jesus, because He alone brings peace to my heart, and I know someday He will bring peace and healing to our entire world.

Thank you, Lord, that despite the unrest and difficulties we all face now, we can have the peace that passes understanding in our hearts, knowing that we belong to You, that there’s a spiritual kingdom greater than any kingdom here on earth, and that someday evil will be overcome by good.

“Our Father which art in heaven, Hallowed be thy name.  Thy kingdom come, Thy will be done in earth, as it is in heaven. Give us this day our daily bread. And forgive us our debts, as we forgive our debtors.  And lead us not into temptation, but deliver us from evil: For thine is the kingdom, and the power, and the glory, for ever. Amen. (Matthew 6:9-13)