Alan and I have flown through the DFW (Dallas, Fort Worth Texas) airport a number of times, and once we even had to spend the night, although we didn’t know where to go or what to do, so we pretty much “wasted” our day. However, my friend Marilyn (who’s also going to share her recipe for chicken enchiladas this Saturday), recommended one excellent opportunity for fun and learning if you’re in the area. Here’s what she shared with me:

Becoming a grandparent is a gift from God because you get a second chance to relive old memories and pour your life into your grandchildren. We are blessed to have our children living fairly close to us, and our two youngest granddaughters are home schooled, which presents new adventures for us.

Recently we went on a home school cooperative field trip to Fossil Rim, a 1,800- acre conservatory protecting 1,100 animals on open meadows near Glen Rose, Texas (just an hour or so from Ft. Worth or Dallas). Not only can you observe these animals, you can interact with some of them as well! 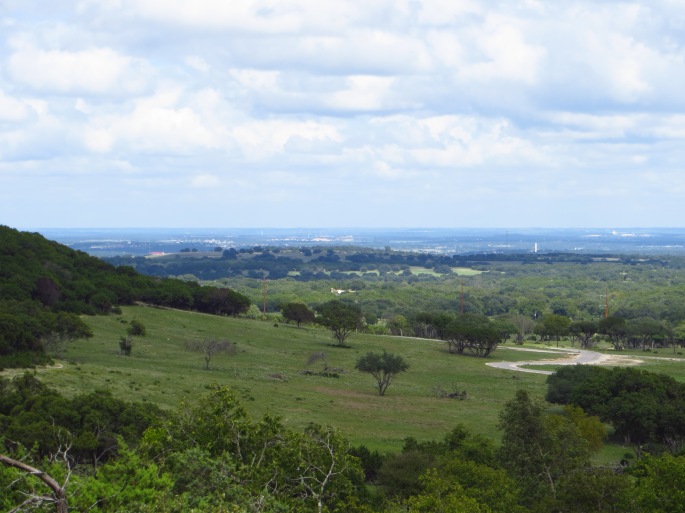 Fossil Rim was named for the terrain which is an upheaval of land that is the beginning of the Texas Hill Country.

Limestone outcropping and caves may be seen in the area. Many fossils can be found indicating total flooding. My granddaughter picked up a rock in the picnic area that was a conglomerate of aquatic fossils and reminded me of Genesis 7:19, “And the waters prevailed exceedingly upon the earth; and all the high hills, that were under the whole heaven, were covered.”

When we first arrived, there was a presentation on the importance of being good stewards by Mark, a former missionary kid and missionary, using a creation Jinga (though he didn’t use the term creation). Blocks were stacked in the order of creation starting with the appearance of the land and ending with the creation of man. Genesis 1:9, “And God said, Let the waters under the heaven be gathered together unto one place, and let the dry land appear: and it was so.” Genesis 2:7, “And the Lord God formed man of the dust of the ground, and breathed into his nostrils the breath of life; and man became a living soul.” 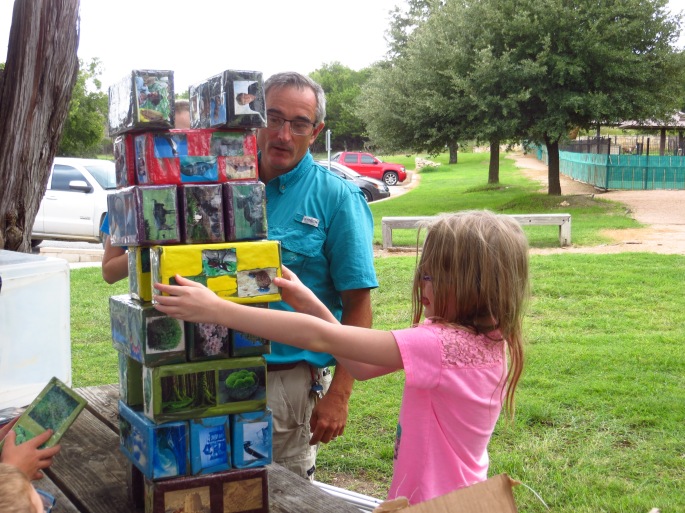 Mark then talked about stewardship, and as the children were chosen to pull boxes from the stack, Mark illustrated the imbalance that occurs when man does not care for what he has been given. Eventually the stack collapsed. Genesis 2:15, “And the Lord God took the man, and put him into the garden of Eden to dress it and to keep it.”

Next was a discussion of how an animal is brought to the park vet for examination. There are three methods: 1) Place food inside a trailer to entice the animal to enter, 2) Use a snare, or 3) Tranquilize the animal, which is only used as a last resort.

We were taught how to use a blow pipe and had fun practicing our skill on a cardboard zebra.

After the teaching time, we boarded the tour bus where our guide told us, “The bus is to the animals what an ice cream truck is to children!” He was so right. The giraffes were the first to see us and approach. Did you know that because of their weight, the giraffe’s gait is to advance front and back legs on one side and then the other in unison?  That was news to me! 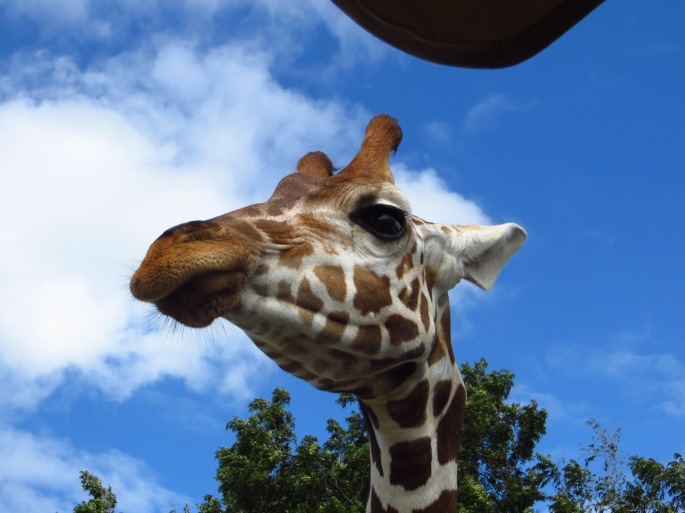 I also learned that giraffes have no upper teeth. They took the pellets from our hands with their soft lips. They have whiskers on their chins and long beautiful eyelashes. We were told that their favorite food is the leaves from the acacia tree, which also has thorns. The whiskers and eyelashes serve to protect their mouths and eyes from the thorns. The eyelashes also shield their eyes from the sun. Their tongues can be up to 20 inches in length. 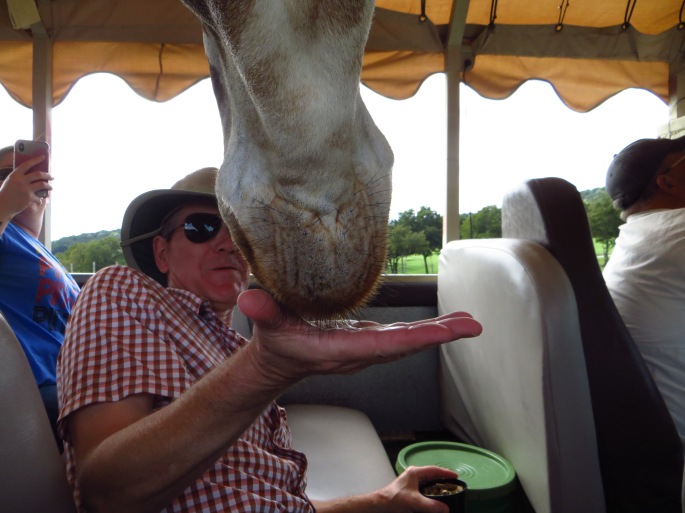 The giraffes were tall enough to “come into” the tour bus. When they took the pellets from our hands we felt their soft lips and bristly whiskers. The biggest one, a male named Mosey, was able to reach beyond me all the way over to my hubby on the far side of the bus. 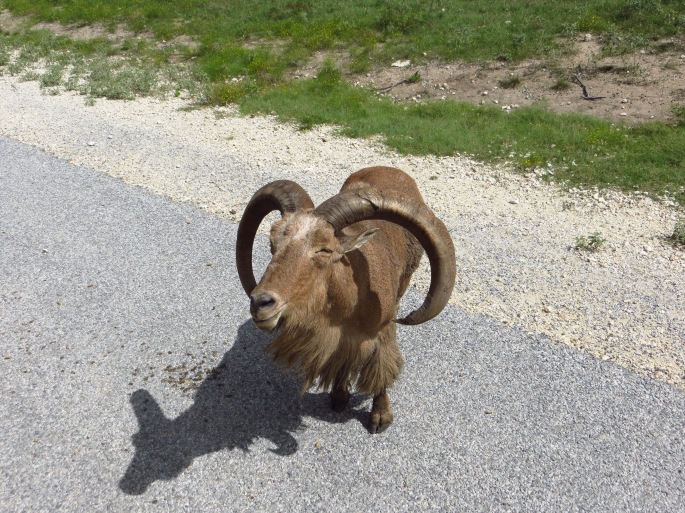 All along our route, the bus continued to be an attraction to the animals. This aoudad sheep seemed to be smiling at us. 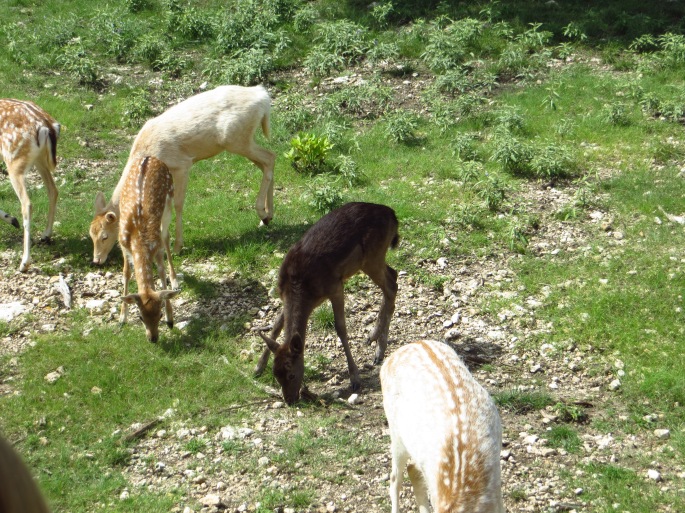 Fallow deer hunted for the pellets that were thrown. Fallow deer come in a range of color from white to dark brown, and many are spotted like white-tail deer fawns. 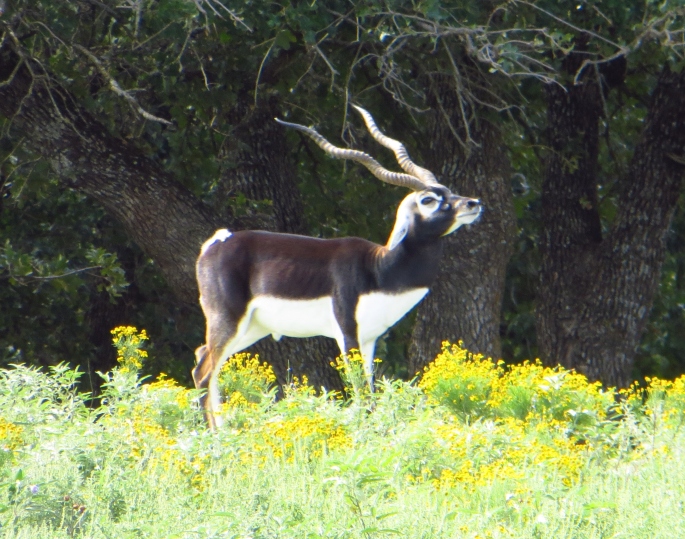 The proud blackbuck was too busy guarding his harem and territory to come to the bus,

and the mountain bongo stayed in the shelter of the trees. 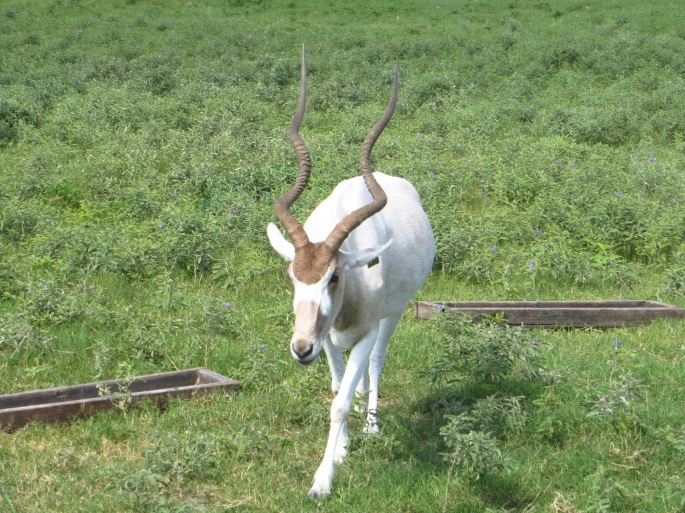 and a Hartmann’s mountain zebra came to get their share of pellets. Other species came to the bus, and still others were in restricted areas that we could see but not feed. I couldn’t help but marvel at the variety of God’s creation and in considering the animals’ ability to approach the bus unafraid made me ponder the bond that God designed between man and animals before the fall. Genesis 2:19b, 20a explains: “and brought them unto Adam to see what he would call them: and whatsoever Adam called every living creature, that was the name thereof. And Adam gave names to all cattle, and to the fowl of the air, and to every beast of the field.

“God saw every thing that he had made, and, behold, it was very good.” Genesis 1:31a