Song of Solomon 7:7  The Hebrew word in this comparison is ‘eskol, which is translated “cluster” in verse fourteen of chapter one (where it refers to a cluster of camphire). Because the Hebrew word is also used to name the Valley of Eshcol (Numbers 13:23), where the children of Israel found fabulously large clusters of grapes, the authorized version adds the words “of grapes” to harmonize with the imagery of verse 8. But, according to Carr, “there is no need to shift the image in this colon. The picture is…of the ‘sweetness’ the heavy, dark fruit provided.”*

As the earlier part of the verse compares Solomon’s wife to a palm tree, a more consistent continuation of the thought might be comparing her breasts to clusters of dates or some similar fruit of the palm. Perhaps the imagery of the bride’s breasts being like clusters of ripe fruit is a natural simile for men, or maybe even for most women, but it wasn’t a natural for me at first. I think of a cluster of fruits—be it grapes, dates, or coconuts— as being lumpy and bumpy, and I think of a breast as being one soft, round entity, more like a peach.

However, as I meditated on what our Lord—the living Word and the eternal author of this song—might have been trying to teach, I remembered back to the days when I used to nurse my infant children. As a girl, I assumed that milk flowed from a mother’s nipple in a single stream, rather like a kitchen faucet. I’ll never forget the first night my infant son started drowning because he couldn’t keep up with the flow of milk! He choked and began to cough, releasing his grip on the nipple. Milk sprayed in no less than seven distinct streams a good three feet away from us in all directions…including his tiny face!

That really enraged him, and I realized with amazement that a woman’s breast is not a “single fruit”…it is really a cluster of “fruits!” Indeed, studying an encyclopedia reassured me that I wasn’t abnormal; a woman’s nipple consists of “fifteen to twenty-five irregularly shaped lobes…Leading from each lobe is a duct, the lactiferous duct, which opens to the outside at the nipple” (The Encyclopedia Americana, 1995, 491).

So, here is another example of the correctness and perfection of the Word. A woman’s breast, although soft and smooth externally, is indeed like a cluster of fruit organically and internally! Also, Solomon—the human author—was a brilliant man and an avid student of natural history, and he could have perceived with appreciation the essential nature of his wife’s breasts as “clusters” of fruit.

But, let’s not spend our whole time thinking technically! What is the meaning of this striking simile? As mentioned earlier, the focus should be on the sweetness and not the shape of the breasts. Her breasts attracted Solomon like the discovery of an oasis on a desert island would attract the attention of a shipwrecked sailor! What? You don’t think so? Then you haven’t been a young wife yet!  🙂

…Well, perhaps that’s a little overstated, but without a doubt, the idea of Solomon’s wife as a statuesque palm laden with clusters of fruit is a most sensuous and appealing thought! Can you picture such a beautiful tree in your mind’s eye? What is the setting? To me, I envision the palm as a striking centerpiece on a tropical isle floating in an emerald sea. I remember visiting one such isle when my husband and I cruised through the French Polynesian Islands in the South Pacific. The sky was sapphire blue, and the crystal waters of the ocean were lapping at the sandy shoreline. Imagine with me. Can you see? 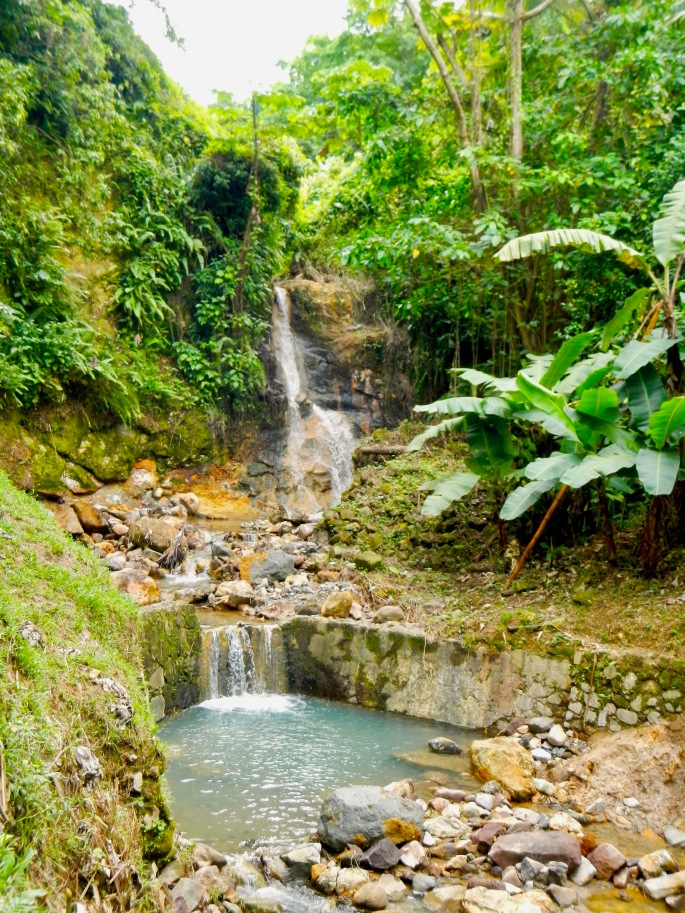 The palm is laden with luscious clusters of fruit that appear temptingly from time to time as the palm fronds ripple in the breeze. As my mind’s eye drifts down from the beautiful palm, I see the backdrop of a pristine beach in a hidden cove. There are no people in the picture, and the only sounds are the rhythmic throbbing of the surf and the stir of gentle breezes in the top of the palm…with perhaps the distant call of an island bird piercing the air from time to time. The scene I remember gives a haunting call to return to that little South Pacific paradise… “Bali Hai… come to me!” Romantic, hidden, wonderful, exotic…paradise just waiting to be found… delight just waiting to be enjoyed… adventure just waiting to begin. 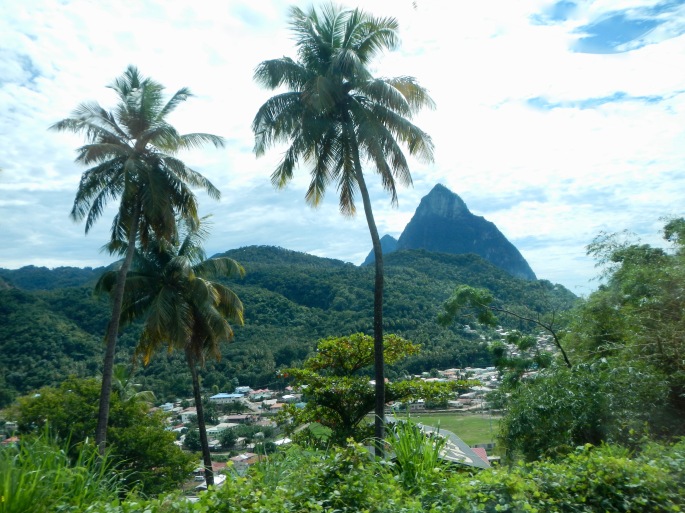 Song of Solomon 7:7 “This thy stature is like to a palm tree…” Palm trees tend to be tall and slender, often with a graceful curve reaching upward toward the heavens. This is an almost universally known fact and would be the most obvious reason for the King comparing his bride’s stature to a palm tree. Those of us who’ve been privileged to view more than pictures of these magnificent trees know the soothing pleasure that comes from watching a palm tree sway gently in the breeze.

For most of us, palm trees speak of warmth…of tropical weather and refreshing fruit drinks…of relaxing times of vacation. For our family, who are annual vacationers in Florida, seeing our first palm tree as we travel south brings a great sigh of relief and excitement: “We’re here!” After twenty-four hours in the van, we can get out and stretch our legs! No more snow and cold…just wonderful warmth and sunshine! It’s easy to imagine the king’s delight as he watched his beautiful young bride, as slender and graceful as a palm tree, and anticipated the bliss of sharing in the warmth and freedom of her love.

Researching palm trees also brings to light some other important (but perhaps less known) facts that provide rich food for thought. Most trees from more temperate zones, like these ancient olive trees from the Garden of Gethsemane, are exogenous, which means they grow by yearly adding layers of woody tissue. Age can be determined by counting the rings (one per year) seen in a cross-section of the tree. With age, the trees become wider and wider and the wood extremely hard and unbending. This characteristic is great if you are a tree hoping to be chopped down and turned into a durable piece of furniture, but it’s not so great if you want to continue living and withstanding storms. 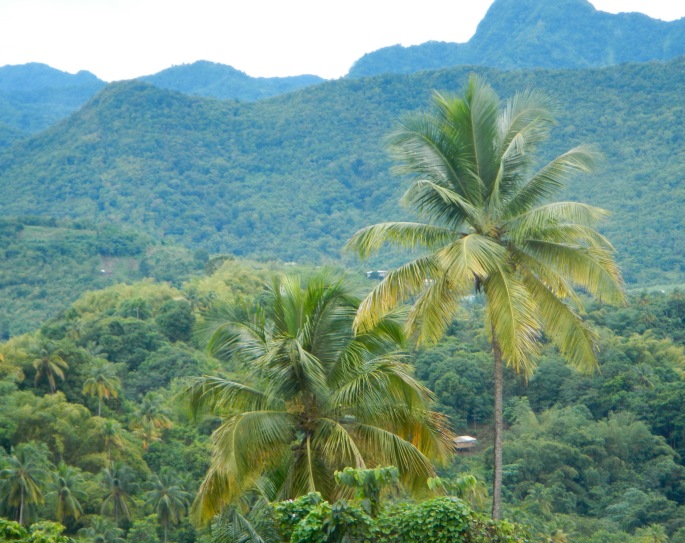 In contrast, the palm tree is endogenous, and its softest part is its heart. (In fact, palm hearts are nutritious and considered a great delicacy.) Palm trees send roots deep into the earth in search of hidden springs so that they can survive even in desserts. These characteristics make palms flexible and resilient. When our property was battered by tornado force winds some time ago, over twenty huge deciduous trees were uprooted and destroyed. In contrast, Alan and I were “privileged” to be holed up at an oceanfront resort when Hurricane Irene ravaged the coast of Florida some years ago.

We watched helplessly as the sea began a frothy rage and boiled over. The large picture window in our room bulged, and the mirrors bounced on the walls. The waves and winds battered the palms mercilessly, and yet, they only bowed and bent, they did not break. When we woke up the morning after the storm had passed by, all the windows and the sunroof had blown out of our car, but the palms were upright and dancing in the sunlight again.

Another interesting fact about palms is that they are one of the largest and most economically important families of the plant world, and in primitive cultures palms are a major provider of sustenance with a multitude of uses, including food, shelter, and clothing. Anyone who understands the supreme significance of the palm tree as a nurturer and sustainer for the world’s children can immediately understand another type of stature being discussed. “This thy stature is like to a palm tree,” could refer not only to his wife’s physical body build but also to his wife’s significance as a “tree among trees.” (See Song 2:3, where the bride compares her husband to a fruitful tree among the trees of the woods).

As the palm is among the most valuable of trees, so is Solomon’s bride among women. Not only was she graceful and beautiful like the palm, she may well have risen to a place of great significance in the kingdom as a sustainer and provider for those under her care.

(Although I took all these photos, I don’t actually have high quality pictures from our Florida trips or Hurricane Irene [which were taken before I had a digital camera], so I used more recent photos from other places.)