Before heading any further into da Yoop, I want to explain 4 words that you’ll need to know as you cross the Mackinac Bridge and leave the trolls behind. Ya, “trolls” are all those wonderful folks who live “below the bridge” (or at least south of it). “Yoopers” are people who live in “da Yoop” (translation into Standardized American English: “the U.P.”) “A?” might be spelled various ways, but it sounds like “A?” and means, “Don’t you think so?” The last term is “Fudgie,” and that refers to tourists who go anywhere in “the north” of Michigan (northern lower peninsula as well as da Yoop) in search of world-class fudge, which, BTW, now often sells for more than $15 per pound. Over many years of experimenting to develop a recipe for fudge that my kids like as well or better than any you can buy, I’ve come up with the following recipe, which makes about 12 pounds of fudge, so unless you have a family of 9 voracious fudgies like I had, you might consider trimming the recipe down a bit.

2 large jars marshmallow cream….then
3 12-oz.packages chocolate chips (I usually use dark or semi-sweet)
Stir until uniformly mixed, then pour out into three buttered 9X13″ pans
(or gift containers if you’re making it for Christmas presents)

You can divide the fudge into several cooking pans and have some plain or add anything you like to dress this fudge up, such as crushed pecans or other favored nuts, peppermints, candy bars, chopped caramels, etc. You can also add peanut butter (either in place of the chocolate chips or in addition to), but the peanut butter makes the fudge a little softer, so you might want to compensate by cooking the portion that will have peanut butter added to it just a tiny a bit more before adding the marshmallow cream and peanut butter…experiment). If you leave out the chocolate chips—although I can’t imagine why you’d want too  🙂  —that produces a “white fudge” to which you can add white chocolate chips, a little maple syrup (another type that would need to cook a bit longer), peppermints, etc. for different flavor twists.

This recipe has been a family favorite ever since I developed it about 30 years ago, and I’m sure we’ve saved either hundreds of dollars or hundreds of occasions of sad-eyed drooling over the years, since I always made some fudge to take along when we headed up to da Yoop on vacations! One of my husband’s coworker’s daughters remarked not too many Christmases ago, “On a 1-10 scale, your fudge is a 12!”

The secret to keeping it creamy is to make sure there are no sugar crystals lurking in the pan when it’s time to pour out. My mom taught me to butter the sides of the pan before ever starting, and then to scrape the sides with a spatula faithfully every few minutes to make sure ALL the sugar dissolves without any crystals forming on the sides of the pan. Also, when I pour out the fudge, I’m very careful not to scrap the sides of the pan where any fudge has already started to harden near the bubble line. This “extra” fudge that remains in the pan is later scraped out and devoured by the family on the spot. Usually the fudge turns out creamy and dreamy for a fraction of the cost and with fresher, better ingredients!

“I will sing unto the Lord, because he hath dealt bountifully with me.”
(Psalm 13:6) 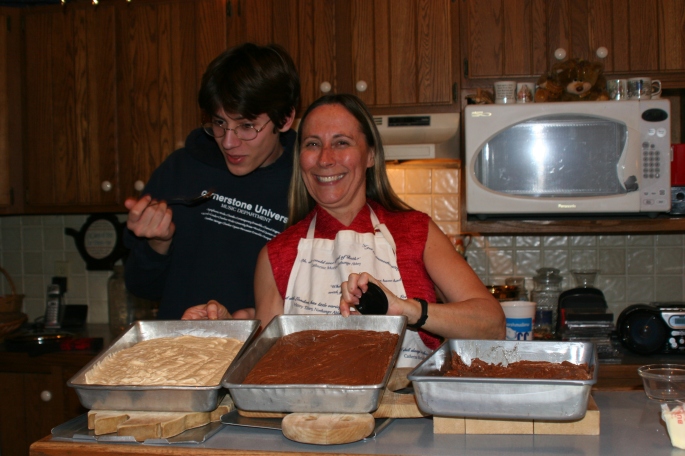 5 thoughts on “Yoopers, Trolls, and Fudgies…and a Recipe for Amazing Fudge”