Below are my favorites from the “Top Ten” most amazing photographs taken by the Hubble Telescope over the last sixteen years. Quote: “They illustrate that our universe is not only deeply strange, but also almost impossibly beautiful.” 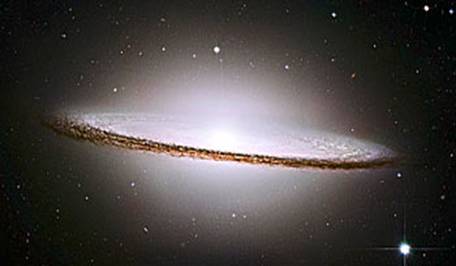 “The  Sombrero  Galaxy – 28 million light years from Earth – was voted best picture taken by the Hubble telescope.  The dimensions of the galaxy, officially called M104, are as spectacular as its appearance. It has 800 billion suns and is 50,000 light years across.”

“Starry Night, so named because it reminded astronomers of the Van Gogh painting.  It is a halo of light around a star in the Milky Way.”

“The Perfect Storm, a small region in the Swan Nebula, 5,500 light years away, described as ‘a bubbly ocean of hydrogen and small amounts of oxygen, sulphur and other elements’.”

“The Trifid Nebula. A ‘stellar nursery’, 9,000 light years from here, it is where new stars are being born.”

“The glowering eyes from 114 million light years away are the swirling cores of two merging galaxies called NGC 2207 and IC 2163 in the distant Canis Major constellation.”

The following information is from an article by Michael Hanlon:

“Hubble, which is about the size of a bus, has been sending pictures and data back to scientists since it began operating 370 miles up. It transmits about 120 gigabytes of information every week. That’s equal to about 3,600 feet of books on a shelf. By putting a telescope into space, astronomers can get views of distant objects without having to look through Earth’s thick and soupy atmosphere. From hundreds of miles above the clouds and weather, Hubble can provide pictures of unparalleled clarity and sharpness. NASA has announced a $900million repair mission in the next couple of years to keep it flying. When the repairs have been carried out, it is hoped Hubble will continue to give many more years of service and, perhaps, even return images superior to those seen here. Henry Lambright, science and technology professor at Syracuse University, New York, says: ‘The beautiful pictures that we see Hubble produce are gripping to everyone who looks at them. They transmit the magic of space in a way that words cannot.'”

“He tells the number of the stars; he calls them all by their names”

As humans, we have identified and named a few thousand of the stars in space and are humbled and astounded by the immensity of this universe where we live. I cannot wrap my mind around a God so great that He created every star and calls them by name. It challenges my comprehension, stretches my faith, and at the same time deeply comforts me to know that this incomprehensibly magnificent God has manifested himself on earth in the form of a man, Jesus Christ, who taught us how to live and died in our place, making it possible for us to be reconciled to God and infused with His eternal life.

“When I consider your heavens, the work of your fingers, the moon and the stars, which you have ordained; What is man that you are mindful of him? and the son of man, that you visit him?” (Psalm 8:3-4).